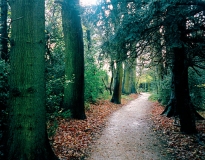 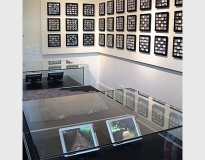 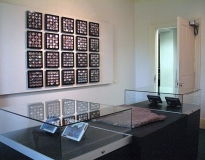 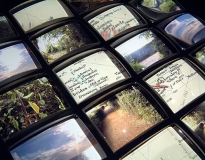 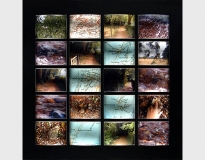 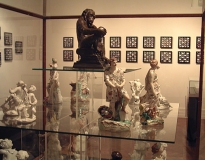 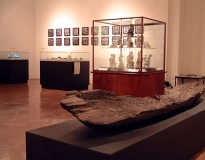 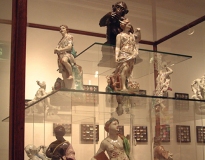 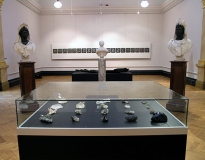 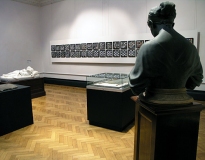 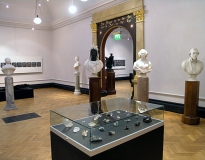 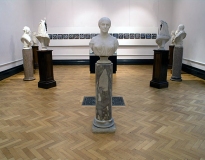 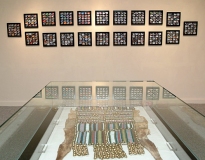 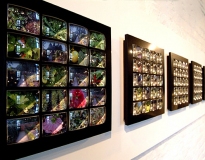 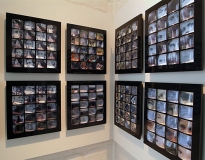 The exhibition Thinking Path was designed to explore and re-contextualize the life and ideas of Charles Darwin through a body of work that combines imagery with historical material and artefacts related directly to the man and his theories. The resulting combination of image, artefact and location provides fresh insight in to the complexities and concerns of Darwin's life and work.

The wall based panels were generated by the systematic accumulation of visual research reinterpreted through a system of 1600 digitised images corresponding to the paces of the Sand-walk or Thinking Path at Darwin's home, Down House 1. Each image is held behind bespoke glass lenses within a laser cut frame.

The accumulation of images was an active research process that mimicked Darwin's own acknowledged research methodology of 'compilation'. The work became a structured combination of alternating images taken from first hand research including video documentation of the thinking path filmed on the four significant anniversaries of Darwin's birth and death, the return to the UK of HMS Beagle and the publication of the Origin of Species. In addition the work incorporated video documentation of sites of direct significance to Darwin such as the room he was born in, local churches he attended as a child, his study and home environment at Down House. This direct research was supplemented by contemporary and historical imagery reflecting upon the four significant themes of birth, journeying, theory and death linked to the four anniversaries above.

The numerical base of 1600 images were in turn grouped into four sets of 400 images. Each set was themed to one of the four anniversaries and comprised of 20 lens frames each holding twenty images. Each set of images was paired with one of four core museum objects that toured to each venue where objects acted as metaphors for the ideas explored in each set of twenty panels 2.

The sequence of reading is abdicated to the viewer who can alter the pace and cross referencing of connections between images, confirming that the work

like evolution, … does not have a beginning or an end, just a constantly changing middle. (Coulter-Smith in Keynes et al, 2004, p.31)3

As the exhibition toured additional artefacts were removed from the host collection to be re-displayed within the context of Thinking Path. This process required ongoing discussion and negotiation with curatorial teams and was designed to give each leg of the tour a unique element that played on Darwinian ideas of adaptability. Overall the renewed context of museum objects added an alternative resonance that reached beyond the expected norms of museological categorisation and curation.

The final element of Thinking Path was the display of the original video footage. Authored on to DVD, the edited and looped footage was shown in pairs on small LCD screens housed within bespoke museum cases. The moving image animates the wall-based work and the display of the footage within formal cases elevates them to the status of museum object, reminding us that the contents of such institutions are part of a continuum and that we, as audience, are in turn a part of that process.

The process of research in itself developed resonance as information was gathered and systems of digitally storing, retrieving and ordering visual information were developed and refined. The similarity to Darwin’s own research methodologies became increasingly apparent as the project developed.

The was supported by funding from the Arts Council England National Touring Programme the Arts & Humanities Research Board, University of Chichester, Shrewsbury & Atcham Borough Council, Crystran Limited and Education Through Art.

Providing a contemporary reassessment of Charles Darwin, Thinking Path attracted attention from a variety of interest groups. In addition the tour programme was supported by a catalogue 4and series of public events designed to promote broad dissemination of the ideas and content of the exhibition.

1 Darwin habitually walked the Sand Walk at Down House, his family home for forty years, on a daily basis.  He used the walk, dubbed his ‘thinking path’ by his family, as a vehicle for reflection and meticulous long-term observations of his environment.  The thinking path fuelled Darwin’s emerging theories, culminating in the Origin of Species.