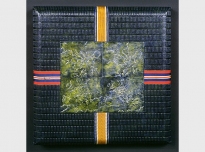 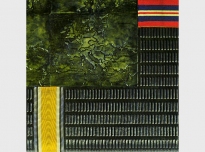 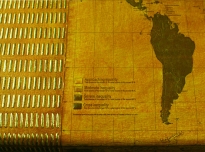 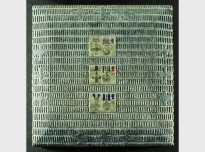 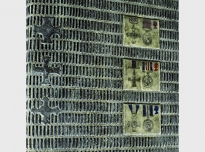 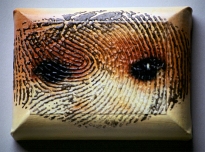 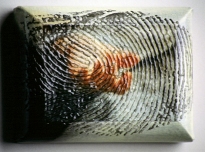 During the early 1990's my practice was predominantly concerned with the production of paintings incorporating cartography and a variety of untraditional materials as carriers of meaning and reference. At this time the resulting work included a particular interest in cartography as a signifier of cultural placement and identity. Cartographic imagery was sourced from specific books that were widely seen as authoritative, if not comprehensive, in their analysis and assessment of contemporary physical geography and associated historic, sociological or cultural demographics. Cartography acts as a carrier of information often taken at face value; and this body of works explored how specialist, refined and informed knowledge was edited and sanitized for popular consumption. The aesthetic of cartography appealed to a longstanding interest in universal, coded systems of information imbued with physical meaning, which in turn imply points of human control and interaction. The prime concern was with how cartography codifies the reality of human intervention, and how the dominance of landscape in predetermining or regulating political and religious jurisdiction shifted with the development of effective long-range communication systems and the increasing technical and military dominance of the 19th and 20th century system of empire and colonization.

Increasingly the work relied on research into the specifics of small scale conflicts within broader cultural shifts in order to inform visual the interpretation of these events. The relationship between past and present was implicit and although the work was not overtly politicized it was imbued with a memorial sensibility and a concern for the anonymous individuals caught up in a variety of small but potent histories.

The development of a research base for each work became increasingly specific and included identifying and accessing research centres and archives that could substantiate facts embedded, but not acknowledged, within the original cartographic source material. In turn these links to information resources yielded additional material that became the starting point for new works in their own right. This work also engaged with the current shifts in cultural identity explored within the visual arts at the approach to the end of the millennium.

The use of materials evolved alongside the referential content of the work as alternative media were used to represent and carry meaning. Consequently traditional media such as paint became less apparent whilst materials such as wheat kernals, sand, bitumen, Dutch gold and gold leaf, were used to animate specific references implicit in the cartographic element of each work. A further development was the use of small artifacts and military insignia such as medal ribbons and regimental buttons, which were embedded within the surface of each work. The origins of the latter were researched and paired with relevant cartographic records of conflicts and battle honours. The combination of contextualised insignia and the use of materials as signifiers within systematically worked surfaces developed a strong sense of visual identity.

Simultaneously the works developed a particular and exacting style using carefully constructed and rendered surface qualities, often coated with visually rich materials. The repeated use of a Braille like mark within each painting gave the work a particular visual identity. These repetitive marks appeared in serried ranks and symbolized the individuals and groups caught up in conflicts and events. The anonymity of the Braille marks referenced both ‘sides’ of a conflict, at times the number of marks was numerically specific to a particular event, at others the accumulation of multiple marks over an expansive surface carried a sense of commemorative meaning within itself. The implication of the viewer prompted a sense of contemporary engagement, questioning issues of economic gain and responsibility.